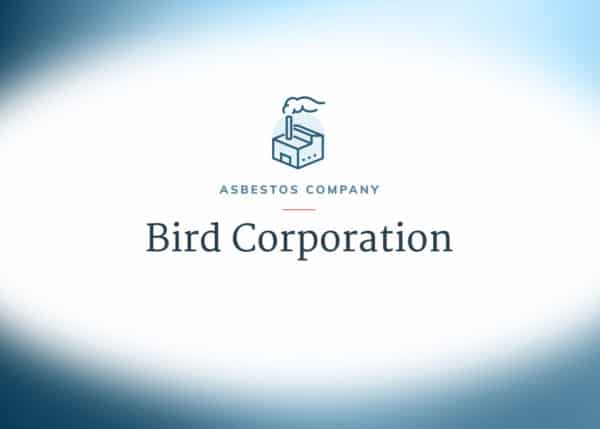 Bird Corporation History of Asbestos Use

Bird Inc., the first name of Bird Corporation, began as a small paper mill not far from Boston, in Needham and Dover, Massachusetts. At first, founder George Bird’s production was slow, making only five reams of paper each day. However, the company expanded quickly and by 1812, the paper company was chosen to supply the United States with the paper used for the American dollar bills.

These first products were produced without asbestos fibers. However, in 1880, the company lost its mill and most of its machinery to a fire and flood. In the aftermath, Bird Corporation was forced to reinvent itself. Charles Sumner Bird, son of founder George Bird, played a pivotal role in the company’s rebranding. Charles tinkered with the sole piece of machinery that survived and within months he had a new product ready to be released: felt-based asphalt roofing. This new product included asbestos in its manufacturing.

Bird Corporation’s felt-based asphalt roofing product, developed in the late 1800s, was the first of its kind. The novel product was widely adopted throughout the northeast for use in homes, barns and schools. The roofing felt remained popular and manufactured in the same way for nearly a century.

The versatility that saw Bird Corporation through fire and flood later proved beneficial for the United States military. At the onset of World War II, the company, now called Bird & Sons, contributed to the war effort, like many other manufacturing companies at the time. Bird & Sons produced shell casings and shipping cartons for the military. During the war, asbestos use was growing across the country and the fibers were included in many war products, which may have led to asbestos exposure among military personnel.

The housing boom that followed WWII was great for Bird’s business, and the company further adapted to the country’s needs. Bird & Sons created vinyl siding, another product that often included asbestos in its manufacture. Vinyl siding was one of Bird’s most popular and profitable products into the 1970s.

Bird Corporation used asbestos in their asphalt roofing materials to increase product strength, durability and heat- and fire-resistance. The popular asbestos-containing roofing felt was a thick, paperboard-like product covered with asphalt. The product was added to roofs to aid in water and weather protection. In addition to asbestos, a mineral grit coats the roofing felt, which came in several weights for a variety of projects. The most common roofing felt is the 15-lb. variety, the lightest option allowed under most building codes. The 15 lb. roofing felt produced by the Bird Corporation is known to have contained asbestos.

Specific products made by Bird Corporation that are thought to have contained asbestos include, but are not limited to:

Exposure to Bird Corporation asbestos-containing products may have occurred at a number of different jobsites across the country. The one-mill operation that began in the 1700s employed more than 170 people in 1994, four years prior to its sale.

Former Bird Corporation employees are not the only people at risk of occupational asbestos exposure due to the company’s use of the carcinogen. Even today, construction and demolition workers may be exposed to Bird Corporation asbestos roofing materials when working on older homes and businesses.

Have a Question About Asbestos Exposure and Bird Corporation?

Bird Corporation began to be inundated with asbestos-related liability cases in the 1980s. To date, the company has been named in some 550 asbestos claims. If you believe you or a loved one was exposed, learn how a mesothelioma lawyer can help.

CertainTeed, the company Bird Corporation merged with, also has been named in numerous asbestos cases and has paid millions to victims of asbestos-related diseases.

Both companies were large manufacturers of asbestos products, Bird Corporation included asbestos in their products until the 1970s. CertainTeed didn’t remove asbestos from its products until about 20 years later, ceasing asbestos use around the 1990s.

As a result of the past inclusion of asbestos in their products, both Bird Corporation and CertainTeed are still facing legal repercussions.