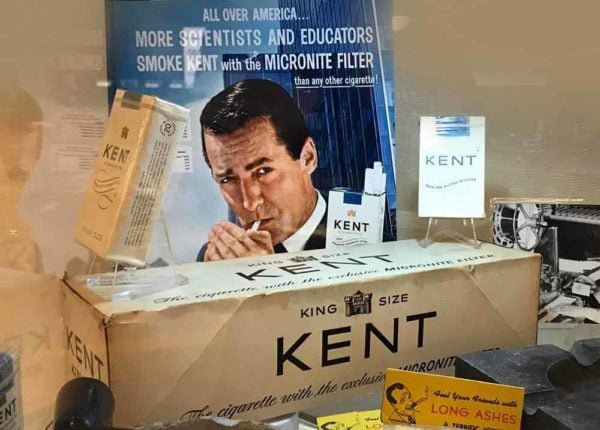 01. Asbestos Use in Cigarette Filters

Why Was Asbestos Used in Cigarette Filters?

According to Lorillard, asbestos was included to provide a finer filtration system. The company advertised better filtration of smoke irritants and a pleasurable smoking experience.

Lorillard Tobacco Company’s Kent Micronite cigarette brand contained crocidolite asbestos from 1952 to 1956. However, some records show the cigarettes were circulated past 1956.

Crocidolite asbestos was incorporated into the crepe-paper cigarette filters. Crocidolite, also called blue asbestos, is one of the rarest types of the mineral. It is also considered one of the most dangerous forms of asbestos due to the microscopic size of its fibers. Asbestos diseases associated with crocidolite asbestos exposure include:

Hollingsworth & Vose Company manufactured the filters under a subsidiary called H&V Specialties. The filters were attached to the rest of the cigarettes, packaged and sold by Lorillard Tobacco Company.

Advertisements claimed the filters protected consumer health by filtering out gas and tar. The company called the Micronite filters “the greatest health protection in cigarette history.”

However, these claims of health protection were ironic. Cigarette smoking on its own is a risk factor for many diseases, including mesothelioma. The addition of asbestos to the cigarette filters compounded these health risks.

Lorillard officials may have been aware of the dangers before discontinuing the filters in 1956. An April 1954 memo from a research director to company president W.J. Halley said researchers had found “traces of mineral fiber” in the smoke.

Two months later, the president of Hollingsworth & Vose Company wrote of Lorillard officials’ worries about asbestos. “It is Lorillard’s belief that asbestos must be eliminated from the Kent cigarette as soon as possible because of a whispering campaign started by their competitors of the harmful effects of asbestos.”

Despite these anxieties, it was a year and a half before the company discontinued asbestos use in Kent Micronite cigarettes.

Dangers of Asbestos in Cigarette Filters

Asbestos exposure can lead to serious diseases, such as mesothelioma and lung cancer. This can occur when individuals inhale the fibers. Smokers of Kent Micronite cigarettes risked inhaling asbestos fibers each time they smoked.

In 1995, researchers tested how much asbestos could be released by Kent Micronite cigarettes. The scientists obtained intact and unopened packs of the cigarettes manufactured from 1952 to 1956.

The researchers measured the total levels of asbestos per filter. They also analyzed how many fibers individuals would consume during a year of smoking. They found:

The study authors concluded individuals who smoked these cigarettes should be warned of “possible substantial exposure” to asbestos.

Consumers were not the only individuals at risk of asbestos exposure due to Kent cigarettes. One study examined the presence of cancers in a cohort of 33 asbestos filter workers. The researchers found an elevated incidence of cancer, including mesothelioma and lung cancer. They concluded the high rates of incidence and death among the workers could be attributed to heavy exposure to asbestos.

The study authors noted the rate of cancer incidence was much higher than expected in a normal population. For example, the entire cohort of 33 workers was expected to only contain 3.5 cancer cases, as opposed to the actual 19. Many of these workers also died from their diseases. The researchers observed relative risk of death increased during subsequent follow-up periods. At the time of publication, 28 of the 33 workers had passed away, more than three times the expected number of deaths.

Who Is at Risk of Asbestos Exposure From Cigarette Filters?

Asbestos-contaminated cigarettes may have exposed thousands of individuals to the dangerous mineral. This included consumers and employees involved in the manufacturing of the cigarettes.

Employees at Hollingsworth & Vose Company may have been exposed during the filter manufacturing process. The filters were manufactured using a “dry” process that produced large amounts of dust. Workers were present while asbestos fibers, cotton and acetate were mixed, carded and deposited onto crepe paper.

Individuals at Risk of Exposure From Asbestos Cigarette Filters

Victims of exposure to asbestos-filtered cigarettes may be eligible for mesothelioma compensation. For instance, victims may be eligible to file asbestos lawsuits. Successful lawsuits prove negligence on the part of the asbestos company and result in awards for the plaintiffs.

Mesothelioma victims wishing to file a lawsuit against Lorillard, Hollingsworth & Vose Company or any other asbestos company should contact a mesothelioma attorney.

Individuals wishing to seek compensation for asbestos diseases should contact a mesothelioma lawyer.