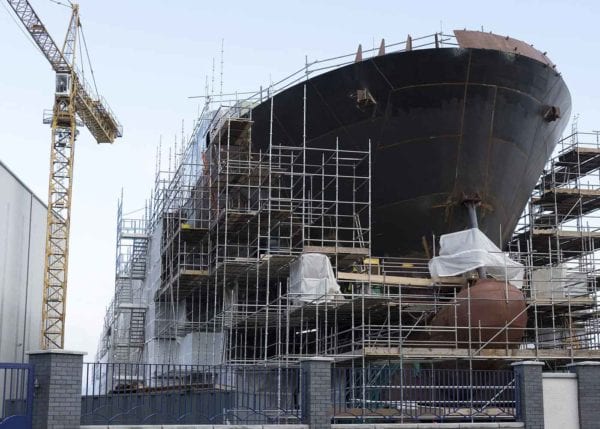 Tampa Shipbuilding Company operated from 1917 to 1948 in Tampa, Florida. It was also known as Tampa Shipbuilding & Dry Dock Company and TASCO. The company took over an existing shipyard run by Tampa Foundry & Machine Co. and built two ships before the end of World War I (WWI).

Between wars, Tampa Shipbuilding Company operated as a repair yard. Before U.S. involvement in World War II (WWII), the shipyard was in a major financial crisis and ownership changed. It went back to shipbuilding during WWII, employing 16,000 workers at its height of operation and was the largest employer in Tampa.

Between construction, repairs and conversions, 494 ships were worked on at Tampa Shipbuilding Company.

After WWII, the yard went into commercial work but discontinued operations in 1948. Today, the former Tampa Shipbuilding Company location is run by Tampa Ship, LLC.

Many workers at Tampa Shipbuilding Company were potentially exposed to asbestos. Workers’ loved ones may have also experienced secondhand exposure. As a result, many people developed asbestos-related diseases, such as asbestosis, asbestos lung cancer, pleural mesothelioma and peritoneal mesothelioma. People who developed an asbestos-related disease may be eligible for compensation.

Hundreds of ships were built, repaired or converted at Tampa Shipbuilding Company. Two notable ships were the USS Piedmont and USS Sierra. Both were destroyer tenders with long and active service with the U.S. Navy.

The USS Piedmont was a destroyer tender laid down in 1941 at Tampa Shipbuilding Company. The ship served in WWII as part of the Pacific Fleet and was present in Tokyo Bay when the Japanese surrendered. She was also deployed during the Korean War and the Vietnam War. The ship’s service in the Vietnam War earned her four battle stars.

In 1963, the USS Piedmont received an overhaul at Long Beach Naval Shipyard. The ship continued to serve for several years. It was then decommissioned in 1982 and subsequently leased and bought by the Turkish Navy. She was scrapped in 1995 by Turkey.

During her entire length of service with the U.S. Navy, asbestos was used in shipbuilding, repairs, maintenance and overhauls. Anyone who worked or served on the USS Piedmont is at risk of developing asbestos-related diseases.

The destroyer tender USS Sierra was laid down at Tampa Shipbuilding Company in 1941. In 1944, she joined WWII efforts against Japan. After the war, she continued tending to the Pacific Fleet. In 1949, she began her service to the Atlantic Fleet and in 1962 had an overhaul at Norfolk Naval Shipyard.

The USS Sierra changed homeports to Charleston Naval Shipyard. She had an overhaul in 1979 in Mobile, Alabama, where she also assisted in the cleanup after Hurricane Frederick. She was decommissioned in 1993 and eventually scrapped in 1995.

During the USS Sierra’s construction and overhauls, asbestos was used in shipbuilding. Anyone who worked on the ship is at risk of developing mesothelioma.

Asbestos Use at Tampa Shipbuilding Company

Shipyards were staffed by military personnel and civilians. Because asbestos use in shipyards was so common, veterans of the U.S. Navy were frequently exposed. However, anybody who worked at Tampa Shipbuilding Company from the 1930s through the 1980s was at high risk of exposure and could develop malignant mesothelioma cancer.

For example, construction and maintenance workers were exposed when working in boiler rooms.

Anyone who spent time at Tampa Shipbuilding Company and developed asbestos cancer or another asbestos-related disease has potential compensation options. The companies who manufactured the products that exposed these people to asbestos can be held responsible.

Some companies that produced asbestos products are still viable. This means the company hasn’t filed for bankruptcy. Thus, individuals can file asbestos lawsuits against that company. These lawsuits could end in verdicts or settlements.

For example, Warren Pumps, LLC is a viable company that wrongfully exposed workers at the Tampa Shipbuilding Company to asbestos through the pumps they produced. These pumps were used within the machine shops. As a result of the asbestos exposure, lawsuits have been filed against the company.

A.W. Chesterton is another viable company that supplied asbestos materials to Tampa Shipbuilding Company. The company used asbestos fibers in its industrial fluid sealing products. As a result, people were wrongfully exposed. Some victims have filed successful lawsuits against these companies.

Asbestos was a common occupational hazard for shipyard workers. If a shipyard worker developed an asbestos-related disease, that person can file a claim with that manufacturer’s trust.

The following companies provided asbestos products to Tampa Shipbuilding Company. After facing many asbestos lawsuits and exposing innocent people to asbestos, these companies filed for bankruptcy and created trusts to pay victims. If an individual worked at Tampa Shipbuilding Company and developed a disease such as mesothelioma, they may be able to file a claim against these companies’ trusts.