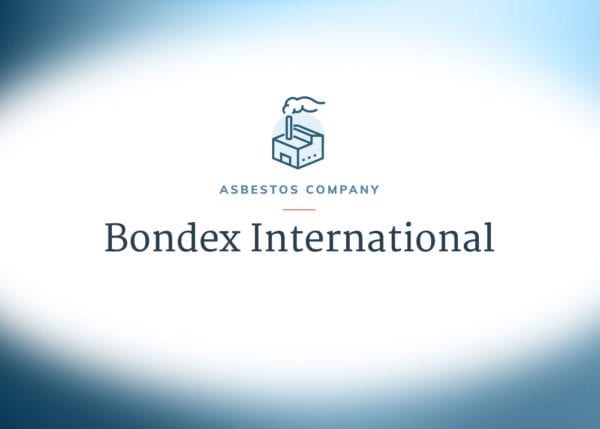 Bondex International History of Asbestos Use

Bondex International began as a small brand in St. Louis, Missouri in 1959. The building products were a success among those in the construction industry and those looking to complete do-it-yourself projects. The fast-growing brand caught the eye of Republic Powdered Metals, which specialized in protective coatings and other industrial maintenance products. Bondex’s parent company Reardon Co. was purchased by Republic Powdered Metals, now known as RPM Inc. in 1966. This acquisition gave RPM Inc. control of Bondex, which was the Ohio-based company’s first foray into more consumer-focused products.

Additionally, Bondex was the company’s first acquisition. RPM Inc. would continue to acquire smaller companies including Rust-Oleum Corporation and DAP Products Inc. in an effort to increase its presence in the building materials market. Some of the companies they acquired were also known to have included asbestos in their products. Bondex used asbestos in their products before, throughout their acquisition and into 1981. DAP also used asbestos in its products until 1977.

Unfortunately, Bondex’s decades-long asbestos use exposed countless Americans to the toxin, leading to mesothelioma and other asbestos-related diseases. Because of these diagnoses, thousands of people began to file claims against Bondex, leading to their 2010 bankruptcy.

Bondex International made asbestos-containing products beginning in 1959. These products were produced under both Reardon Co. and RPM Inc. Asbestos was a known carcinogen as early as the 1920s. However, Bondex and its parent companies continued to use the cheap additive through the 1980s.

Asbestos is known to have been included in Bondex’s joint compound, texture paint, topping cement and roof cement, among others.

In addition to the Bondex brand name, Bondex International asbestos products were sold at:

Bondex International was initially conceived as a do-it-yourself brand aimed at homeowners for repair jobs. However, the asbestos-containing products have also been the source of occupational asbestos exposure.

All employees working on the manufacture of Bondex brand products may have been exposed to asbestos during their regular job duties. Construction workers, including drywall tapers, masons and others, may have also used the asbestos-containing products while at their jobsites.

Today, demolition and construction workers may still be exposed to Bondex asbestos products when working on older homes, schools and public buildings.

RPM Inc. started having asbestos-related litigation issues in the 1980s. In 2003, these asbestos claims depleted their insurance policy. Prior to 2003, RPM Inc.’s insurance was able to cover approximately 90% of its Bondex asbestos-related costs.

In the years that followed the end of the insurance payments, RPM Inc. was drowning in asbestos-related expenses. From 2005 through 2009, Bondex and Specialty Products Holding Corp, one of the other RPM subsidiaries that used asbestos, had asbestos costs between $60 million and $82 million each year. In 2000, when insurance was still making payments, they spent only $8.2 million on their asbestos litigation costs.

In 2010, without the assistance of the insurance payments, the burden of the asbestos-related costs led RPM Inc. to file Chapter 11 bankruptcy for its Bondex unit. At the time of filing, there were more than 10,000 asbestos lawsuits filed against Bondex International. That same year, a chief executive for RPM Inc. said they had paid out more than $600 million to Bondex asbestos victims in the previous eight years alone.

Have You Been Exposed to Asbestos by Bondex International?

Request our free guide to see if you qualify for financial assistance.
Get Help Now

The Bondex trust was formed in 2016 and was initially funded with $797.5 million. The trust, officially called The Bondex Asbestos Personal Injury Trust, was established and began accepting claims on July 1, 2016.

All asbestos trusts pay a set percentage of each claim filed against it to ensure there are adequate funds for future claimants. However, asbestos victims may receive a higher payout than the base compensation percentage based on a number of factors, including, but not limited to, age, exposure, type and firm settlement history.

Since its formation in 2016, the Bondex asbestos trust has steadily received an influx of capital based on the reorganization plan approved in the company’s bankruptcy filing. The U.S. Bankruptcy Court in Delaware ordered the $797.5 million be paid into the trust in installments within four years of the trust’s creation.