More than 50 nations have banned asbestos over the past three decades, but that fact provides little comfort to Sharad Vittnal Sawant of Mumbai, India. He works in a factory that uses chrysotile asbestos and lives in a nation that is one of the world’s largest importers and consumers of asbestos. Hundreds of his fellow workers at the factory have been diagnosed with asbestos-related diseases – and both Sawant and his wife have asbestosis.

Last May, Sawant travelled to Geneva, Switzerland where he made a moving appeal at the Rotterdam Convention, pleading with delegates to place chrysotile on its list of dangerous substances. “I have worked for 40 years at the factory Hindustan Ferodo (now Hindustan Composites), which uses chrysotile asbestos,” Sawant began. “I am suffering from asbestosis and my wife as well. About 400 of my colleagues have been diagnosed as well. I came here to request you to put chrysotile asbestos on the PIC (Prior Informed Consent) List of the Rotterdam Convention,” Sawant said.

His remarks were met with cheers from many delegates and jeers from at least one industry lobbyist, according to published reports. However, his pleas went unheeded: The convention rejected a move to place chrysotile asbestos on its PIC list. The move wouldn’t have banned exports and imports of the substance, but it would have required that governments in all nations be provided full information about the dangers to human health and the environment before importation.

Why Banning Asbestos Is So Hard

The convention is an international treaty intended to regulate global trade in dangerous chemicals and protect the world’s most vulnerable nations. Under its rules, placing a chemical on the PIC list requires unanimous consent. The move to place chrysotile on the PIC list failed after Russia, the world’s biggest asbestos producer and three other nations objected. It was the fifth time the convention had rejected a move to place chrysotile asbestos on the list of dangerous substances.

Like much of the developing world, Sharad Vittnal Sawant learned a hard truth from the vote at the convention. Despite a definitive finding by the World Health Organization and numerous scientists that all forms of asbestos, including chrysotile, are human carcinogens, and despite calls from scientists for a worldwide ban, even modest efforts to restrict and regulate the use of asbestos are difficult to adopt in the face of opposition from the asbestos lobby. As a result, there is a continuing and thriving worldwide trade in asbestos, one that has particular consequences for people in developing nations where the use is most prevalent.

“I have been researching and analysing developments in the global asbestos trade for over 25 years,” Laurie Kazan-Allen, Coordinator of the International Ban Asbestos Secretariat (IBAS), told Mesothelioma Cancer Alliance. “When I began in 1990, global asbestos consumption was nearly 4 million (metric) tons a year. It is now around 2 million. While some progress is better than none, it still means that millions of people around the world are experiencing hazardous exposures on a daily basis.”

Indeed, although asbestos is now banned in 52 nations, dozens of countries still use, import, and export asbestos and asbestos-containing products. Those countries are primarily developing nations in Asia and Eastern Europe that are desperate for industrial growth and often turn a blind eye to the health and environmental consequences of asbestos exposure.

The worldwide trade has been enabled and led by a handful of powerful interests, for a long time the Canadian asbestos lobby and now the Russian asbestos producers.

“Over recent decades, developed countries have restricted or prohibited the use of asbestos,” Kazan-Allen explained. “To compensate for this loss in trade, global asbestos profiteers have targeted markets in developing countries, many of which are in Asia. In countries such as India, Vietnam and Thailand there are few health and safety regulations and the ones which exist are not enforced.” 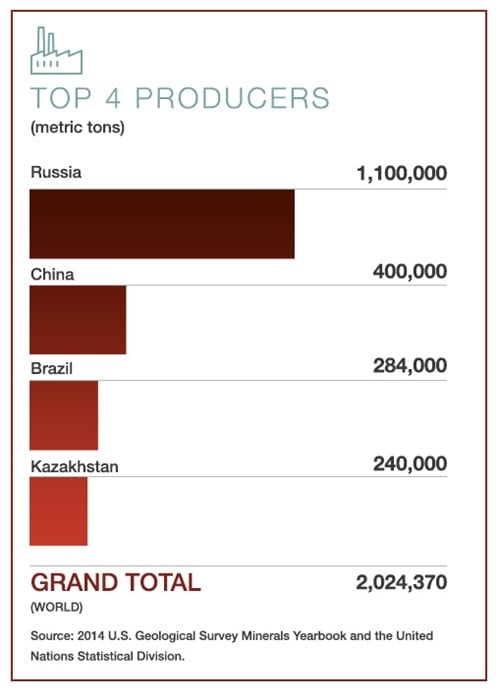 And there’s no indication that worldwide asbestos production is likely to slow down in the near future, at least in Russia. According to one report, Russia has mines rich enough in asbestos deposits to last for more than 100 years at current levels of production. 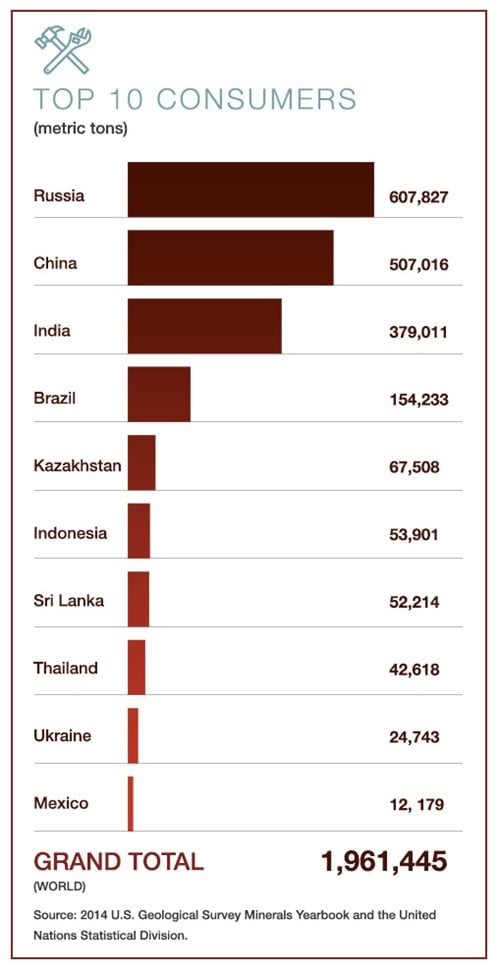 According to estimates of apparent asbestos consumption calculated by the IBAS, the 10 top asbestos-consuming nations in 2014 were Russia, China, India, Brazil, Kazakhstan, Indonesia, Sri Lanka, Thailand, Ukraine, and Mexico. The estimates are based on data from U.S. Geological Survey (USGS) and United Nations statistical data.

Asbestos Deaths on the Rise

Occupational exposure to asbestos was responsible for 194,000 deaths in 2013, according to statistics from The Global Burden of Disease Injuries and Risk Factor Study of 2013, published in the Lancet medical journal. Those numbers represent more than an 80 percent increase from the 107,000 deaths figure from the World Health Organization.

A large percentage of those deaths have occurred in Europe and the United States and are a consequence of heavy asbestos use during earlier decades. For countries that have stopped using asbestos, deaths from asbestos-related disease have not yet peaked, but are expected to eventually decline. By contrast, developing countries in Asia that are the primary consumers of asbestos today are expected to have a substantial increase in asbestos-related diseases decades from now, because of the long latency period, according to the World Health Organization and other scientific groups.

“The ARD (asbestos-related-diseases) epidemic will likely not peak for at least a decade in most industrialized countries and for several decades in industrializing countries,” the Collegium Ramazzini warned last June. The Collegium is an international academy of 180 scientists from 35 countries that examines critical issues in occupational and environmental medicine. It has called for a ban on all mining, manufacture and use of asbestos.

“Asia is a ticking time bomb,” said Linda Reinstein, president of the Asbestos Disease Awareness Organization (ADAO), which works with public health organizations and scientists around the world in an effort to eliminate asbestos-related diseases. “Eight countries – Brazil, China, India, Indonesia, Russia, Sri Lanka, Thailand, and Vietnam – are the largest asbestos producers and users, and account for nearly 50 percent of the global population,” she continued. “The catastrophic burden of asbestos-caused disease has yet to be felt.”

Kazan-Allen has a similar view. “When you combine the lack of workplace or environmental asbestos protections with the popularity of smoking and the younger ages at which people are exposed in asbestos in these countries, there can be no doubt that the asbestos epidemics now raging through Europe and North America will reach Asia in the very near future,” Kazan-Allen warned. She added that tobacco and asbestos interact synergistically to produce heightened risks for those exposed to both asbestos and tobacco.

To be sure, there are various local and global efforts to ban or reduce the production and use of asbestos in parts of the world. “South America is likely to change drastically in the next years,” Marc Hindry of the French National Association of Asbestos Victims (ANDEVA) told Mesothelioma Cancer Alliance.

Peru and Colombia “are moving toward a ban,” and Brazil, one of the four asbestos-producing nations and a big asbestos user, “is slowly closing down on asbestos activities,” Hindry said. “Brazil took a very responsible position at the Rotterdam Convention, supporting inclusion of chrysotile (asbestos) on the PIC list and stating that they are currently discussing use of asbestos.”

Moreover, “Africa could turn to a general ban on asbestos,” Hindry continued, adding that all of the African nations, with the exception of Zimbabwe, have supported inclusion of chrysotile asbestos on the PIC list at the last three Rotterdam Conventions.

Despite those advancements, neither scientists nor advocates for banning asbestos expect to see a worldwide ban anytime soon, and they warn that the consequences will last for decades.

“The top five barriers to elimination of asbestos include propaganda and misinformation, lack of education and training, disease latency period, weak regulatory enforcement and economic pressure,” said the ADAO’s Reinstein.

Looking ahead, there will be another move to restrict and regulate use of chrysotile asbestos at the Rotterdam Convention in 2017, but supporters aren’t optimistic.

“There will definitely be another effort to put asbestos on the PIC list,” said Hindry. “The prospect of success is essentially zero as long as Russia will continue to oppose it.”

“The problems is the absurd interpretation in the context of public health of the tradition at the U.N. of negotiations by consensus,” he added. “The consensus rule of course makes sense in peace discussions, (but) it become absurd when any country, wishing to protect some industry interests, can simply declare that ‘the earth is flat’ and therefore there is no certainty about the toxicity of chrysotile asbestos.”