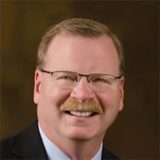 Dr. Edward Setser is a surgeon at East Falls Primary & Specialty Clinic in Idaho, where he specializes in vascular and cardiothoracic surgeries. A former military surgeon, Dr. Setser’s career has taken him to hospitals in several states throughout the southeast United States. From 1985 to 1996, Dr. Setser served as an intern, resident, and later, a surgeon in two U.S. Army hospitals; he was promoted to the position of chief of cardiac surgery service at Eisenhower Army Medical Center.

He brings nearly 20 years of experience to his practice.