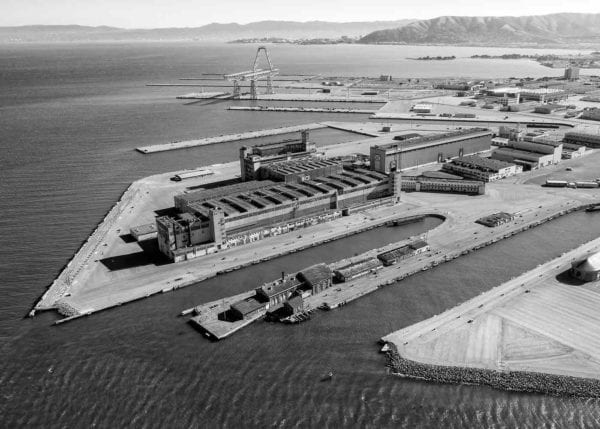 Located on the southeastern portion of the city of San Francisco on a peninsula that extends into the San Francisco Bay, Hunters Point Naval Shipyard began its operations in 1869 as a commercial dry dock facility.

The federal government purchased the shipyard in 1939 and leased it to Bethlehem Steel Company. In 1941, the Navy took over the site in the days surrounding the attack on Pearl Harbor. From 1945 to 1974, the shipyard acted primarily as a repair facility. However, in 1946, as part of Operation Crossroads, Hunters Point Naval Shipyard was charged with decontaminating ships used for offshore atomic weapon testing. The shipyard also housed the Naval Radiological Defense Laboratory from 1948 – 1969.

Hunters Point Naval Shipyard was closed in 1974. In 1976, a private ship repair contractor leased the yard and began subletting buildings to civilians including several artists. In 1985, the City and Navy announced plans to rebuild the base and home port the USS Missouri and other naval ships at Hunters Point. In 1989, the USS Missouri homeporting was canceled, and the shipyard was declared a Superfund site. In 1991, it was identified for Base Realignment and Closure. Existing tenants were allowed to stay.

Today, the former shipyard faces mounting controversy as it struggles through environmental cleanup and a multi-phase redevelopment plan.

Many workers at Hunters Point Naval Shipyard were potentially exposed to asbestos. Workers’ loved ones may have also experienced secondhand exposure. As a result, many people developed asbestos-related diseases, such as asbestosis, asbestos lung cancer, and pleural and peritoneal mesothelioma. People who developed an asbestos-related disease may be eligible for compensation.

During its operations, workers at Hunters Point Naval Shipyard built many ships for wartime efforts. Battleships, cruisers and other types of ships were built or serviced here. Ships built at the naval yard had prominent roles in World War II and the Korean War.

At the time these ships were built, asbestos was heavily used in building materials. As a result, shipyard workers and military personnel risked exposure at Hunters Point Naval Shipyard.

The USS Independence joined the Pacific Fleet in 1943 as the first of a new class of carriers built on converted cruiser hulls. She participated in attacks on Rabaul, Tarawa, Luzon and Okinawa. Most notably, the USS Independence was part of the carrier group that sank the last of the Japanese Mobile Fleet at the Battle of Leyte Gulf.

She was later used as a target during the Operation Crossroads atomic testing. Assigned as a target vessel for the Bikini atomic bomb tests, she was placed within one-half mile of ground zero for the July 1, 1946 explosion (Test Able). The ship did not sink, however, and after taking part in another explosion on July 25 (Test Baker), was taken to Kwajalein and decommissioned on August 28, 1946. The highly radioactive hulk was later taken to Pearl Harbor and San Francisco for further tests and was finally sunk in weapons tests off the coast of California on January 29, 1951.

While the USS Independence had a short life compared to other carriers of her time, the asbestos used in the materials to build her put many lives at risk of developing asbestos-related diseases like mesothelioma. This included the lives of insulators, laggers, electricians, plumbers and pipefitters

The destroyer USS Blue was launched in November 1943 by Bethlehem Steel Company, Staten Island, NY. She was very active in WWII as part of the Pacific Fleet in 1944 and 1945. After her service in WWII, she spent time in the Puget Sound Navy Yard for a complete overhaul in late 1945 and early 1946. USS Blue spent much of the next year engaged in tactical and hunter-killer anti-submarine warfare exercises and performed patrol duty. She returned to the United States early in 1947 and was placed out of commission in reserve at San Diego.

After undergoing an overhaul at San Francisco Naval Shipyard (Hunters Point Naval Shipyard), USS Blue returned to the Pacific Reserve Fleet and was once again decommissioned in San Diego in 1949. She was recommissioned again in 1950 and served in the Korean War. During her service of that war, USS Blue spent time at San Francisco Naval Shipyard for overhaul. Since that time, USS Blue carried out the normal operating routine of the Pacific Fleet destroyers. She conducted several tours of the Far East. During the intervals between these cruises, she conducted local operations and type training along the west coast until she was decommissioned in 1971 and sunk off of the California coast.

USS Blue was active during a time when shipyard workers and crewmembers were at great risk of asbestos exposure. This high-risk exposure put them in danger of developing asbestos-related diseases such as mesothelioma.

Asbestos is a durable mineral that is highly resistant to heat. Due to these properties, shipbuilders often used asbestos during the construction process. Products containing asbestos helped control the release of heat and were fire-resistant. Such products were desirable on ships.

Hunters Point Naval Shipyard actively operated as part of the Navy from 1941 to 1974. Asbestos was commonly used during this time. Asbestos was used throughout Hunters Point Naval Shipyard. The dangerous mineral was often present in boilers, incinerators, insulating materials and other elements of ships. This put those in various shipyard occupations at risk of developing asbestos-related diseases.

Members of the U.S. military and civilians provided labor in shipyards and on ships. Asbestos was used in most shipyards, including Hunters Point Naval Shipyard, and aboard most vessels from the 1930s to the 1980s. This likely exposure puts Navy veterans at an increased risk of malignant mesothelioma cancer.

People who constructed or maintained battleships, submarines, aircraft carriers and cargo ships during this time were likely exposed to asbestos. These people often worked in space-constrained and poorly-ventilated areas, which possibly allowed more asbestos fibers to remain in the work areas. For example, steamfitters faced asbestos exposure.

Exposed to asbestos at work: Steamfitters

Steamfitters worked with pipes designed to carry high-pressure steam, water or gas. Steamfitters often had to break through the asbestos-containing materials used to insulate the pipes they had to fix. This created a high risk of asbestos exposure.

Starting in the 1980s, most newly manufactured products did not contain asbestos. However, anyone who continued working in the shipping industry risked exposure to asbestos. That exposure could occur through legacy asbestos materials. Many shipyard duties, including insulating the ship, maintaining boilers and installing pipes, exposed people to asbestos.

Anyone who spent time at Hunters Point Naval Shipyard and developed asbestos cancer or another asbestos-related disease has potential compensation options. The companies who manufactured the products that exposed these people to asbestos can be held responsible.

Some companies that wrongfully exposed workers to asbestos are still viable. In other words, they have not filed for bankruptcy. This means individuals can file lawsuits against such companies, which may result in a mesothelioma settlement or verdict.

Uniroyal Holding, Inc. manufactured asbestos-containing products, including insulation, that was used at Hunters Point Naval Shipyard. People who worked with these products were wrongfully exposed to asbestos.

Another example of a viable company is Crown, Cork & Seal. Crown, Cork & Seal bought Mundet, a firm that made cork bottle caps and insulation that contained asbestos, in 1963. This insulation was used in shipyards and exposed workers and crew to asbestos-related diseases such as mesothelioma.

Several victims have filed successful lawsuits against these asbestos companies.

An 84-year-old former U.S. Navy ship’s serviceman served aboard the USS Blue while it was overhauled at Hunter’s Point Naval Shipyard from September 1950 to July 1953. Among his duties, he was responsible for washing all of the laundry of the ship’s crew. This included the work clothes for boiler tenders, firemen, machinist mates, electrician mates and shipfitters, all of whom used asbestos-containing products during the course of their duty. Handling and shaking out these crew members’ uniforms and coveralls exposed him to large quantities of asbestos dust.

After exposing many people to asbestos and dealing with the associated claims, more than 100 companies have filed for bankruptcy since the 2000s. As part of their bankruptcy filings, many of these asbestos companies created trust funds to compensate current and future victims of asbestos diseases.

Many Navy veterans, shipyard workers and others have developed asbestos-related illnesses after asbestos exposure on the job. Victims can seek compensation by filing an asbestos claim against the responsible asbestos manufacturer’s trust fund.

The following companies provided asbestos products to Hunters Point Naval Shipyard. After facing many asbestos lawsuits and exposing innocent people to asbestos, these companies filed for bankruptcy and created trusts to pay victims. If an individual worked at Hunters Point Naval Shipyard and developed a disease such as mesothelioma, they may be able to file a claim against these companies’ trusts.