Heather Von St. James, an 11-year-survivor, remembers her friend as a true inspiration. “Lou Williams was someone I constantly looked up to. A truly global anti-asbestos advocate, a woman with a gentle voice that roared. She tirelessly fought this disease while fighting for awareness, and never giving up hope for a cure. She inspires many with her quiet strength, her poise and dignity. A true warrior who will be mourned all over the world.”

A Long Battle with Mesothelioma

Lou’s first exposure to asbestos came as a child in Australia. Her father worked in the building trade and worked with asbestos often. Lou helped clean the asbestos dust from his car and the home. Her father was later diagnosed with mesothelioma and died from the disease in 1985.

Lou’s exposure didn’t end there, as she also worked in an office contaminated with asbestos for three years in Melbourne. The impact of inhaling asbestos fibers can take decades to first show. Even then, the early symptoms are nonspecific and frequently cause misdiagnoses for even common ailments like the flu.

After eight years of chronic pain and 18 months of misdiagnoses, Lou learned she had peritoneal mesothelioma in 2003. Lou underwent surgery to remove the tumors followed by an intense 18 sessions of chemotherapy.

After beating peritoneal mesothelioma, Lou was again diagnosed in 2009. This time she faced pleural mesothelioma, which required more aggressive treatment. Lou again had to undergo surgery, but this time required three major operations to try to remove the tumors followed by another round of chemotherapy.

By January 2015, Lou said her body was shutting down. Her oncologist explained there were no other options to combat the disease. At the time, Lou had to be on oxygen 24/7, morphine, and had blood fusions biweekly. She suffered extreme nausea and weighed less than 100 lbs. Her quality of life was on a downward spiral, but Lou would never give up.

In April 2015, Lou was given some hope. She knew she was in the end stages of the disease, and had to take whatever chances she was given. Her oncologist recommended Keytruda® (pembrolizumab), an immunotherapy drug that interferes with the growth and spread of cancer cells. Her oncologist said this drug could give her quality of life back, and possibly give Lou another 12 – 18 months to live.

Keytruda®has provided some hope in the mesothelioma community and proven effective in some cases. Lou’s friend and fellow warrior in the U.K., Mavis Nye, was able to join a clinical trial for the drug and saw promising results. In Australia, however, Lou could only receive the treatment at her own expense. Each infusion cost thousands of dollars, and the infusions were required every three weeks.

Despite the heavy cost, Lou jumped on the opportunity. After her third fusion, her CT scans showed shrinkage, and by the fifth transfusion she no longer relied on oxygen or morphine. Lou stayed on these infusions for 11 months and had quality of life back.

The hope she saw with Keytruda®led Lou to advocate for the drug to be fast tracked on the Australian Pharmaceutical Benefits Scheme. She strongly believed if the treatment could be offered at a more affordable price, oncologists could offer patients this option before they were already advanced to an end-of-life stage.

“Lou fought for it to go on the free list and we all cascaded her petition,” Mavis recalls of her long-time friend. “It would have been great if she had succeeded. The drug worked for a while and turned her immune system back on, but only for a year. Lou said that it had helped her to stay with her family that bit longer.”

Sadly, in March 2016 Lou had a setback and her tumors showed growth and some spreading in her lungs. Lou was taken off Keytruda®and instead had weekly chemotherapy treatments. But Lou still credited Keytruda®for giving her quality and quantity of life, and continued to advocate for its benefits for other mesothelioma patients. Even in the face of such devastating news, Lou vowed to never give up and continued to fight.

“Lou has really fought mesothelioma for 15 hard long years, but worked for asbestos awareness around the world,” Mavis said. “So many mesothelioma warriors will miss her and we will all live by her words, ‘never, never, never give up.’”

In addition to her advocacy work for making Keytruda®more available to those who suffer from mesothelioma, Lou also worked tirelessly to help reach a global ban on asbestos. Lou worked with many advocacy organizations in Australia and around the world to lend her voice to the fight, even when she faced particularly trying times in her disease. 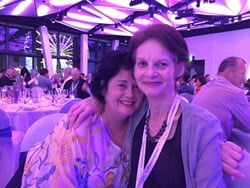 Her passion and commitment resonated throughout the mesothelioma community and inspired those who worked with her. Linda Reinstein, the co-founder and president of the ADAO, expressed how getting to know and work with Lou had a profound influence on her own efforts.

“ADAO grieves with Lou’s husband Keith, her daughters Deborah and Jo, her dearly loved grandchildren and friends. I am so very honored to have known Lou for 7 years … we all are … and her spirit will continue to inspire,” Linda said. “The impact Lou had on the world is unquestionable. She was a much-loved friend to many of us and an inspiring voice in raising asbestos awareness and fighting for a worldwide asbestos ban. My love for Lou will fuel my work forever.”

Lou is already greatly missed, but she will never be forgotten.