Steve Carroll was a family man and community man. Born on Christmas Day in 1945, he was a storyteller and someone who cared deeply for those around him. “My father was a Zen Buddhist, a lover of poetry, a Red Sox fan,” remembers Steve’s daughter Willa, a writer and performer in New York City. “My father read The Hobbit aloud when I was a kid and did a great voice for Gollum. My father loved blues, Bob Dylan, train whistles, mountains, gardens, and pie for breakfast. He was beyond proud of his children and adored his grandchildren. He cooked elaborate holiday meals with his wife. He believed deeply in social justice.”

That social justice was something that played out not just in Steve’s words, but also in his actions. “I recall a story he loved to tell,” Willa recently told the Mesothelioma Cancer Alliance. “When he was young and working in an ice cream shop, the mayor of the town came in with his entourage and expected to be served before the crowd of customers. My father simply told him to get in line. Yes, my father harbored a rebellious streak, but more than that, he truly believed that those eager children were as important as the mayor.” 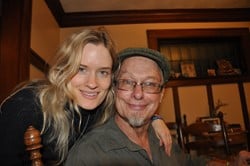 A carpenter by trade, Steve also used his skills and experience to help others. “In his work life, he restored historic mansions and performed handyman jobs for people in Section 8 housing,” Willa said. “He abhorred privilege and prejudice and taught me that all human beings are equal and interdependent. By his own complexity, by the fact that he did not fit into a demographic mold, he taught me to be compassionate toward all people and curious about their individual stories.”

Sadly, a little more than a year ago, on September 29, 2015, Steve passed away from mesothelioma at the age of 69. However, he passed on his storytelling and sense of social justice to his daughter Willa, who is now a staunch advocate for the effort to ban asbestos.

“I don’t want other families to suffer like mine,” she said.

Steve was diagnosed in November 2014. “After experiencing a feeling of pressure in his chest for a few weeks, my father went the hospital where they drained two liters of fluid from his left lung,” Willa recalled. “After a scan, a diagnosis of pleural mesothelioma was confirmed.”

That day, everything changed for Steve and the rest of the Carroll family. Still, Willa remembers that even as the treatments and the disease itself weakened her father, he remained strong in spirit.

The standard treatment for mesothelioma is a multimodal approach involving a mix of surgery, chemotherapy, and possibly radiation. Unfortunately, like many individuals diagnosed with late-stage mesothelioma, Steve’s cancer was too far progressed to allow for surgery. “His oncologist did not consider him a good candidate for surgery because chemotherapy was not effective and the tumors progressed rapidly,” Willa recently told the Mesothelioma Cancer Alliance. “My father sought some relief in acupuncture treatments that helped his pain and energy levels.”

It was very difficult for Steve and his family to face the lack of treatment options and the aggressiveness of the disease. “Two rounds of chemotherapy did little to halt the tumors, growing like a husk in the pleural sheath around his lung,” Willa explained. “Our family rallied around him for the ten months he survived. It was beyond difficult to watch him suffer. Formerly a robust non-smoker, soon he was thin and would get winded and visibly pained walking even a few steps.”

Nonetheless, Steve’s waning physical health did not dampen his resolve. “Through sheer will he stayed active and as positive as possible. His suffering intensified in the last couple months of his life when he developed peritoneal mesothelioma, with tumors binding his liver and spleen. Barely able to eat, he was still at home and on his feet a week before he died.

Steve passed away after six days in palliative care, on September 29, 2015. “Facing death, he showed equanimity and his own brand of strength,” Willa stated.

As Willa said, Steve and his family didn’t simply sit and wait for the disease to take his life. While he underwent treatment, he also sought to understand how this terrible form of cancer came to invade his body.

“After diagnosis he pieced together a work history entailing various asbestos exposures,” Willa explained. “We had been unaware of his risks as this information is still not widely known.”

As it turns out, Steve faced multiple exposures over his lifetime. “His first exposure was in 1973 when he worked for a carpenter’s union and installed asbestos tiles in federal housing projects,” Willa said. “From 1974 to 1983, he was Head Sexton at a church and one of his duties was to maintain the boiler during the city’s long northern winters. The boiler itself along with the pipes and parts that he replaced were all insulated with asbestos. My father was further exposed during his thirty-plus years as a carpenter / contractor due to asbestos in drywall and joint compound and other building materials.”

Willa learned a lot about asbestos and the dangers it poses as a result of her own and her father’s research. “The material is most dangerous when inhaled; sharp fibers puncture the lung tissues, and after a latency period of approximately 12 – 40 years, aggressive tumors can develop,” she reported. “Asbestos fibers are easily crushable and as a result become airborne. Invisible fibers can be carried on hair and clothes and can pose a danger to family members, so simply wearing a respirator is not enough protection.”

Taking on the Fight to Ban Asbestos

Willa had never heard of the disease that killed her father before his diagnosis. But now that she knows what it is and what it can do to a person, she has formed a resolve to see that mesothelioma gets stopped at its source by helping to ban asbestos.

“I hope that I can help raise awareness about this brutal disease and the need for more research and treatment options,” Willa said. “Mesothelioma is caused by asbestos exposure; there are no other causes. It’s imperative that asbestos be banned in this country. How is it that a known carcinogen, lethally dangerous even in the smallest amounts, remains legal?”

At first, Willa didn’t realize that she was going to become a champion for mesothelioma research and a ban on asbestos. “I was surprised by how I quickly needed to become an advocate for mesothelioma awareness,” she said. “Very few friends and colleagues had heard of the disease and I found myself continually explaining its aggressiveness and its connection to asbestos. Yet the most impactful shock was the intensity of grief. I focused on staying strong for my dad for ten months and was blindsided by the prolonged depth of pain in losing him.”

Now, she has advice for others who could be exposed to asbestos. “I urge anyone in hazardous trades or even someone simply performing home renovations to be vigilant and educate themselves. Before the ’80’s, asbestos was widespread in construction materials and insulation and in many other products due to its low cost and fireproof qualities. Asbestos is still used in brake pads in the U.S. and many other countries. If asbestos is suspected in a home or office, one should invest in proper abatement, or at least follow suggested guidelines.

Willa also supports a number of efforts to cure mesothelioma and ban asbestos. “My family has encouraged donations to the Mesothelioma Applied Research Foundation. Also recently, I contacted our New York State Senators regarding the Frank R. Lautenberg Chemical Safety for the 21st Century Act and the momentum towards banning asbestos. Asbestos is also a global issue, especially in China, India, Brazil, Russia, Canada, and the U.K. Closer to home, I worry that we will see many more future cases among 9/11 relief workers who were exposed to asbestos, considering mesothelioma’s long latency period of up to forty-plus years.”

As an author, Willa also plans to use her own work as a platform to confront both the disease and its cause. “I will continue to deal with these issues in my own writing. This past June at a literary event I read my poems about my father’s illness. After the reading, a woman approached me and shared that she had also lost her father to mesothelioma. Our conversation was cathartic for both of us. And it was meaningful to me as a writer, a path that made my father proud.”