Mesothelioma survivor Heather Von St. James recently spoke with Mesothelioma.com about her annual Lung Leavin’ Day celebration. The yearly event at Heather’s home marks the anniversary of her lung removal surgery. She explains the celebration as a beacon of hope for those with mesothelioma and other forms of cancer.

This year, due to the COVID-19 pandemic, the Lung Leavin’ Day celebration will be virtual for the first time. Read on for more information about participating and for wisdom from the 15-year cancer survivor.

Heather Von St. James celebrates the anniversary of her pleural mesothelioma lung removal surgery each year. This year, the celebration is virtual.

Donate to the Cause: The Von St. James Travel Grant Fund

The following is an interview of Heather Von St. James by Mesothelioma.com. The content has been lightly edited for clarity and reviewed by Heather prior to publication.

Mesothelioma.com (M): Can you explain the history and significance of Lung Leavin’ Day?

Heather Von St. James (Heather): My sister thought of the name. She jokingly said, ‘we’re Swedish and now that you’re having your lung removed on Groundhog’s Day we have to name it something different,’ because February 2 is the anniversary. So she’s like, ‘instead of Groundhog’s Day, now it’s called Lung Leavin’ Day, because it’s the day your lung left.’ 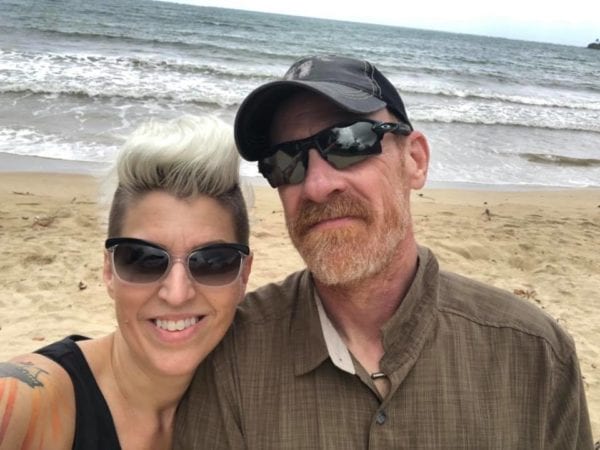 Heather Von St. James and her husband, Cameron, on the beach.

She and my husband started talking about how we could really celebrate. My sister is a yogi master and firewalker – she and her husband have done firewalking. She suggested, ‘you should do firewalking.’ And in firewalking, you write your fears on a piece of wood, you throw it in the fire and walk over it. And then my husband [Cameron Von St. James] said we should be like the Greeks and throw plates. My husband said we should write our fears on plates and then break the plates in a bonfire. So that’s where the whole plate idea came from.

M: What was the first Lung Leavin’ Day celebration like?

Heather: February 2, 2007, my husband comes home from work with two plates and two sharpies. I was like, ‘oh my God, I forgot completely about that.’ And he said, ‘yea, I didn’t.’

So he went out to the backyard and started a fire, and it was 17 below. It was super cold. We were out there with our little fire, and we wrote our fears on the plates and smashed them in the fire. It just felt amazing, we were like, we have to share this with people. We started thinking about how to make it a [bigger] celebration.

The next year, we just invited friends and family. We had about 40 people show up, and I was shocked at how big it got. The most we ever had was the ninth anniversary, and we had more than 150 people [at the house].

On the sixth year, we started doing it as a fundraiser. We’ve been giving back to the meso[thelioma] community ever since. It’s become about overcoming fears and triumphing and turning something that was so tragic into a positive.

Now we’ve raised over $45,000 for mesothelioma research since we started. It’s just a small house party, so I’m pretty impressed with how well we do with a small little fundraiser.

M: Can you talk a bit about the change to the virtual format?

Heather: This year, because of COVID, we’re obviously not having the party for everybody. But my husband said, ‘well, we’re still going to celebrate.’ So we’re going to do it virtually. I’m going to broadcast live on Facebook and Instagram on my accounts.

M: Is there anything that the virtual event affords you that you’re really excited about?

Heather: I’m sad because I’m a very social person, and getting together with the people is what really makes the party special to me. We always dedicate the party to a friend we’ve lost in the last year, and this year [the event is] for Annamarie Kearns.

So there’s part of it, I’m sad because there aren’t going to be the people here. But I’m also excited because I’ll be able to donate more money because I won’t have the expenses of the party, and that makes me happy. And not putting in all the work, which is horrible, but it takes weeks to get ready for this thing. It’s like throwing a wedding every year.

I’m kind of looking forward to a simpler celebration and just connecting with people online from all over. And having people literally from all over be able to attend and join us. That’s exciting to me.

M: Why would you encourage someone to attend this year’s virtual event?

Heather: Facing your fears and giving a voice to them is incredibly empowering because so many people shove their fears down. So facing your fears, writing them down, seeing them smashed, helps you move forward, helps you let loose of those things that may be holding you back. I know people who’ve told me it’s been life-changing for them for that.

M: Do you think celebrations like Lung Leavin’ Day mean a little something more this year in light of the pandemic?

I think this year there are going to be a lot of people who are like, we’ve been through so much individually and as a country in the last year. There’s a lot to conquer and move forward, and hopefully, [we] have hope coming up and light at the end of the long, dark tunnel.

M: Do you have any specific memories of Lung Leavin’ Day celebrations of years past you’d like to share?

Heather: You know, I knew [this was special] that first year when it was just my husband and I. We were like, we have to share this with people. And then every year afterward I’ve gotten letters or notes from people about how much this party inspires them. So you know, people sharing with me the impact it has on them has been life-changing, and then having people come from literally all over to attend the party. 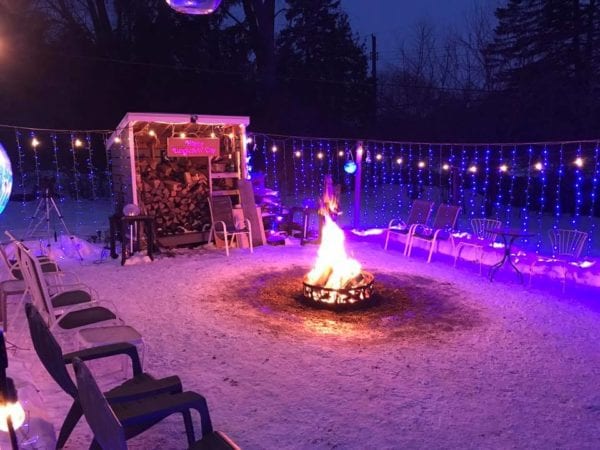 But what really made it special was the first year that somebody else that had meso or lost a loved one to meso came and it wasn’t just me. Then we started sharing it with other cancer survivors and other meso patients and the loved ones of meso patients, and that’s when I knew we had something really special.

It wasn’t just about me at that point. It was about how it could help others in their journey, even in their loss, to process and move forward. It was incredibly humbling to be surrounded by people in the community.

M: How much preparation goes into the day?

Heather: It’s like planning a wedding every year. But I’m very fortunate because I have a ton of help. I have a friend who plays hostess and I don’t have to worry about getting people their coats or filling up the food. My friend has volunteered to be the hostess every year, and she’s phenomenal at it. And I have another friend who sells the merchandise, so I can be little miss social butterfly.

So I get to be the bride, and I don’t have to worry about any of the details because I have my little planners.

M: Can you give some examples of the kinds of things people write on their plates?

Heather: I laugh when I see little kids’ plates because the things they’re afraid of are so funny, like broccoli. 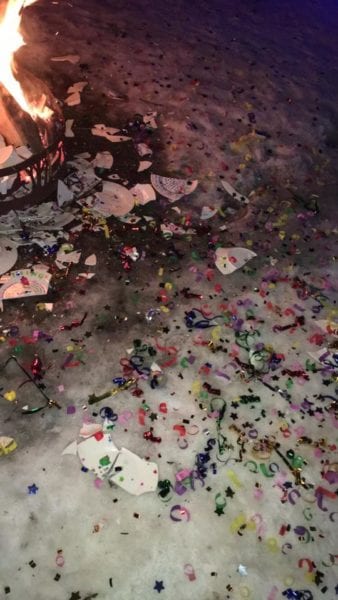 Broken plates in Heather’s backyard from a past Lung Leavin’ Day celebration.

Everybody goes about it differently. Some people will sit down and really think on it, close their eyes and be in a quiet spot. They’ll fill the plate with spirals of fears. The whole plate will be covered, front and back. And then there are other people that write one or two things and their name on it, and that’s all they do. So, it’s very personal.

My fears change from year to year. The main ones stay the same. The fear of recurrence, leaving my family. COVID is a big one. Not being able to get the vaccine and being stuck in the house. I fear for my daughter for not having a normal high school career. My health is definitely my main fear.

M: Changing gears a bit, can you talk a little bit about 15 years of survivorship?

Heather: I was given 15 months, you know. To make it 15 years is mind-boggling. I don’t really deeply think about it a lot. I kind of more or less just go, I’m still here. Despite all the odds. I’m still here, and I think that’s why I’m passionate about giving back, because I am that example for people, and I do provide hope. I’m in shock a little bit. It’s a whole myriad of emotions. Joy, obviously, that I’m here.

M: Has your outlook on your cancer diagnosis changed over the years?

Heather: I’m much more cynical now. I’ve seen so much, and I’ve been around it longer than most people. I’m excited when I see new treatments because I know that they’re working on it, but I’m cynical when I hear doctors pushing the same narrative over and over again. ‘You’re different and you’re younger.’ I’ve seen [this cancer] do horrible things to people.

The other part of me, I have an all-new passion for the patient experience and giving the patients a voice. I think a lot of times the caregivers don’t allow the patient to do as they wish. So that’s changed a whole lot, how I look at things.

I’m also cynical about banning asbestos. I used to be really hopeful about that, but now I’m like if it hasn’t happened yet, it isn’t happening now.

I’ve definitely gotten more cynical as I’ve gotten older. It’s kind of equal parts cynic about being around the cancer community so long and seeing the inequity. The inequity in healthcare and types of cancer that people deal with.

But also hopeful, very hopeful because of immunotherapy, [which] has given people a new lease on life. Surgery is not as barbaric as it used to be and there’s hope for non-surgical patients. So there’s a lot to be excited about, too.