Through my years blogging for the Mesothelioma Cancer Alliance, I have had some pretty amazing opportunities to get my story out there through blogs, opinion pieces, and most recently an interview and video with Greenpeace. Why Greenpeace you might ask? What does an organization better known for saving the whales have to do with mesothelioma and asbestos?

To answer your questions, all I need is one word: environment. This current administration is causing many of us who are passionate about environmental issues a lot of anxiety about not only climate change denial, but the blatant disregard for common sense and safety when it comes to asbestos. The president himself has been quoted extolling the benefits of asbestos, not even taking into consideration how dangerous it actually is.

In 2012 he tweeted: “If we didn’t remove incredibly powerful fire retardant asbestos & replace it with junk that doesn’t work, the World Trade Center would never have burned down.” But we know that literally tons of asbestos were used and rained down all over Manhattan when the twin towers fell. The death toll from that tragedy continues to rise as a result of that and the other chemicals in the toxic dust.

When Scott Pruitt was nominated to head the Environmental Protection Agency (EPA), I did some checking and what I learned made my stomach hurt. This man, who was not very popular in his home state of Oklahoma, has sued the EPA, the very agency he has been chosen to run, over a dozen times. I keep wondering how a known climate change denier will do in charge of an agency that is in place to protect the environment. It turns out I’m not the only one.

Greenpeace, which has been at the forefront of environmental issues for years, is concerned about this appointment and the pending cuts to the EPA as well. I interviewed with Ryan Schleeter, who had written an op-ed piece about his concerns. Their interest was piqued because I am a victim of a known environmental toxin, one that just this last year was finally listed on the EPA’s Toxic Substance Control Act: asbestos.

With cuts to the EPA, or abolishing it altogether, the protections that have been put in place could disappear. Asbestos is already loosely regulated, and despite thoughts that mesothelioma cases peaked, the opposite is true. According to the CDC, mesothelioma cases rose instead of fell.

Getting My Story Out

When I talked with Ryan, I shared my story. I told him of getting the news that I had mesothelioma when my baby was just 3½ months old. I told him about the surgery I had that took my entire left lung and the debilitating effects of the chemo and radiation that followed in the months after my surgery.

I missed out on the first 18 months of my baby girl’s life all because I had been poisoned by asbestos. When I know that this disease is preventable, that simply keeping exposure from happening can keep people from getting sick, it boggles my mind that more isn’t done to either ban or keep this substance from killing more people. 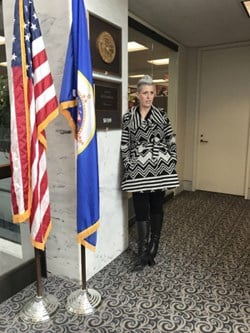 I told Ryan about my concerns and said if he wanted to meet I would be in D.C. the following week for a conference, since I knew the main office for Greenpeace was located there. As a result of that conversation, an idea was born.

We filmed a video and interview to go with the written article to drive home the importance of the EPA. We met with a videographer and filmed in locations around D.C., including in front of the White House, the Capitol Building, and the EPA headquarters, which ironically enough are located across the street from the new Trump Hotel.

I had set up a meeting with a staffer in Senator Amy Klobuchar’s office to discuss the EPA cuts and what other budget cuts concerned me. I’m fortunate my senators, Amy Klobuchar and Al Franken, are very pro-environment and agree that EPA budget cuts could mean disastrous things for not just Minnesota, but the entire country.

We finished up the video with an interview, and despite problems I’d been having with my voice, it came out great. The video launched April 12th, and to date has over 550,000 views.

By telling my story and how the cuts to the EPA and other science-backed organizations are going to harm our future, I feel like I’m doing my part. You can too. Now is the time to get involved.

All it takes is a phone call to your representatives’ and senators’ offices. They are easy to find! You can go to USA.gov and all the information you need is there. Make a phone call, tell them not to cut the EPA budget.

Getting involved is easier now than ever. Let’s work together to keep our future safe, not just for us, but for all the future generations. Supporting Veterans on Memorial Day and All Other Days