Promising results from Phase 1b of a clinical trial for an immunotherapy drug for patients with malignant pleural mesothelioma, CRS-207, have been released. Developed by the pharmaceutical company Aduro Biotech, the drug works by combining live bacterium with the standard of care combination chemotherapy. The results were presented at the European Lung Cancer Conference (ELCC).

“Malignant pleural mesothelioma is a cancer of the lining of the lung and is rare, but difficult to treat,” said Professor of Medicine at the UCSF Helen Diller Family Comprehensive Center in San Francisco, Dr. Thierry Jahan.

CRS-207 is a live bacterium that is engineered to induce an anti-mesothelin response in malignant pleural mesothelioma patients with mesothelin expressing tumors. CRS-207 works together with a patient’s immune system and chemotherapy regime to prevent tumors from growing more and potentially shrinking them.

“A standard of care treatment with pemetrexed and platinum compound chemotherapy gets a 30% response rate, but a modest impact on survival. So there is a clear unmet need in targeting this specific population,” said Dr. Jahan.

The drug first showed promise about a year ago when it was granted Orphan Drug Designation by the U.S. Food and Drug Administration (FDA) after positive results from its Phase 1 study. This designation gives Aduro Biotech some grant funds to help defray costs of development and some tax credits.

Now, Aduro Biotech has finished enrollment of its multi-center Phase 1b trial, which investigated the combination of CRS-207 and standard of care chemotherapy in patients with malignant pleural mesothelioma (MPM). During Phase 1b, 38 patients who were chemotherapy-naïve with adequate organ function and good performance status were treated.

All participants received two infusions of the immunotherapy drug two weeks apart in combination with pemetrexed and cisplatin every three weeks for up to six cycles. Two extra infusions were then given three weeks apart. Eligible patients were able to get maintenance therapy every eight weeks until the disease progressed.

“CRS-207 is an exciting agent for patients with mesothelioma. Our preliminary results are encouraging, suggesting superior clinical activity when added to standard chemotherapy,” said Dr. Jahan.

The median follow-up was 9.4 months after which 59% achieved a partial response and 35% achieved stable disease. 8.5 months was the median progression-free survival. Overall survival has not been calculated yet.

“The safety of the agent was remarkable. It really does appear to be safe, and was well-tolerated in combination with pemetrexed and platinum chemotherapy,” said Dr. Jahan. “There didn’t seem to be any cumulative toxicity.”

The drug’s only adverse events were grade one or two infusion-related pyrexia, chills/rigor, hypotension, and nausea/vomiting. The fevers and chills were fixed within 24 hours. Most importantly, no serious adverse events or deaths resulted.

“On the basis of these Phase 1b results, we plan to advance directly to a Phase 3 clinical trial with CRS-207 in combination with standard-of-care chemotherapy in patients with unresectable MPM,” states Aduro Biotech’s website.

Three Benefits of Telemedicine in Cancer Care and Mesothelioma 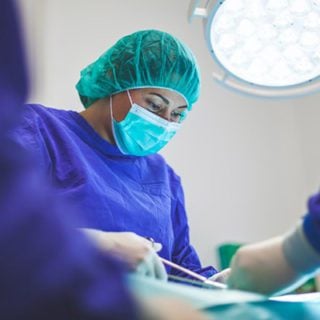 Repeat CRS and HIPEC May Improve Survival in Peritoneal Mesothelioma