My daughter Lily just celebrated her 8th birthday this month. Eight years old! At times I find it hard to believe she is already 8. Other times it seems like she should be older because she is so wise for her age. Of course we had a HUGE birthday party to celebrate, because I like to make a big deal about birthdays. I have since her first birthday, quite simply because I didn’t know if would be around to see her turn 1, let alone 8!

I, like most other parents, think back to that day she was born and everything that followed her birth. I can’t help but be thankful that she was healthy, happy and a really great baby. But there is the side of me that mourns for all that was lost. I don’t dwell on it but, at times, the reality of what I’ve gone through sneaks up on me, and her birthday is one of those times.

Being diagnosed with mesothelioma when she was just 3 1/2 months old, the illness eclipsed much of our first year together as a family, and much of my first year as her mom. I missed her entire 6th month of life while I was in Boston for my surgery. During the next few months of recovery, I was at most, a spectator. My mom and dad fulfilled the role of mother and father while I healed. I slept a lot and had very little energy to be a mom. My husband was back in Minnesota and he missed her 6th, 7th and 8th month of life.

We moved back home in May of 2005, when she was 9 months old and I immediately started chemotherapy. For 5-6 days following chemo, I needed someone at the house taking care of Lily if Cams couldn’t do it. I was far too ill to care for her. As the effects of the chemo subsided, I was able to care for her a little better. I remember sleeping when she slept and doing very mundane things, like taking her to Target or to a friend’s child’s soccer game. It was all I was capable of and, some days, just laying on the couch while she played in the living room was all I could do. As her first birthday approached, I finished my last chemo treatment and by the time we had her party, I was feeling really good. My parents drove out to celebrate with us, as did many of my husband’s family from out of state. Lily’s first birthday was cause for celebration. Despite everything going on, I threw a huge party and loved every minute of it. About a month later, I started radiation. 6 weeks of treatments, 30 sessions, Monday through Friday. I hired a family friend to be our nanny for those 6 weeks, because radiation hit me hard– I was so very sick. At one point, I recall sitting on the radiation table and sobbing, telling them I just couldn’t do it any more. I felt so sick and tired. The nurses held my hand, rubbed my back and hugged me. They told me I could stop anytime I wanted, but I was at the halfway point and I knew I could do this. I thought of Lily and Cams and how far I’d come, wiped my tears, and said, “Let’s do this.” I finished the treatments 3 weeks after that.

The one thing I am exceedingly thankful for is that Lily was too young to remember any of it. She was surrounded by people who love her and she did not suffer from lack of attention or affection. The painful choices we had made in those early months of her life we made so the illness would have as little effect on her as possible. We never kept anything a secret from her and have been very upfront about what I’ve been through.

It was not until this year that I realized that perhaps it is not as easy on her as I had hoped. That my frequent trips to Boston bothered her more than I knew, or that my limitations make her know I am different than other moms. She and I were driving and she asked me to go on a field trip at school. This particular field trip consisted of a lot of walking uphill and was quite high activity. I probably would have been ok if it was just she and I, but keeping track of a bunch of kids, it was not good idea. So I told her I wasn’t able to. She said to me, “I wish you never had cancer, then you could do more fun stuff with me.” It broke my heart. I tried to explain all the good that has come of it. That I am able to be with her more, but it didn’t change the fact that I couldn’t go on that particular field trip. She has since gotten over it. Me? I don’t know if I will. 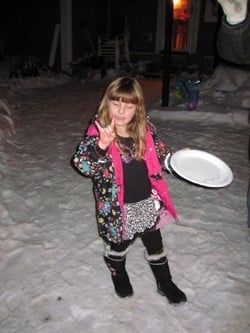 I also realized this year, that scanxiety also affects 7 year olds. Right before my last trip to Boston, she started complaining that her tummy hurt. She had had the stomach flu a fews times during school year, and I thought we were in for another round of it. She was unusually needy and clingy, so I asked her if anything was bothering her. She looked up at me with her big hazel eyes, nodded her head, and quietly said to me, “I’m afraid your scans are gonna be bad.” I just hugged her closed and did all I could go reassure her that I was fine, and if the scans came back showing something, my doctor is the best doctor in the whole world and he will make it better. Wow, that one hit me out of left field. Just about the time you think you have your kid figured out, a new facet shows up. She has this very quiet side of her where she internalizes her worries or fears and then they come out in ways like tummy aches. I did what I knew what to do, we prayed about it, we talked about it and we brought Daddy in and discussed it as a family. Her tummy started feeling better and, within a fews hours, was back to herself. When I was in Boston that week, I made sure that she got the news as soon as possible that my scans were clear.

There are no parenting manuals on how to raise kids after you’ve fought cancer. If there are, I haven’t found them. But every person and family it is different. For us, we talk about it. It is a part of our everyday life, because of this blog and because I choose to be vocal about my battle. Lily has not been shielded from anything. Is this the right way to go? I guess I will never know, but to us it feels right. I do all I can to give her an amazing childhood, and probably go overboard on things, like birthday parties or buy her too many stuffed animals. I just pray that she grows up with compassion for people who find themselves in the same situation. I do know that she is a pretty special kid and has grown up fast because she had to. And because of this, I will continue to throw the best birthday parties, spoil her more than I should, and continue on the path we are on. One day, hopefully SHE will inspire people with her story.